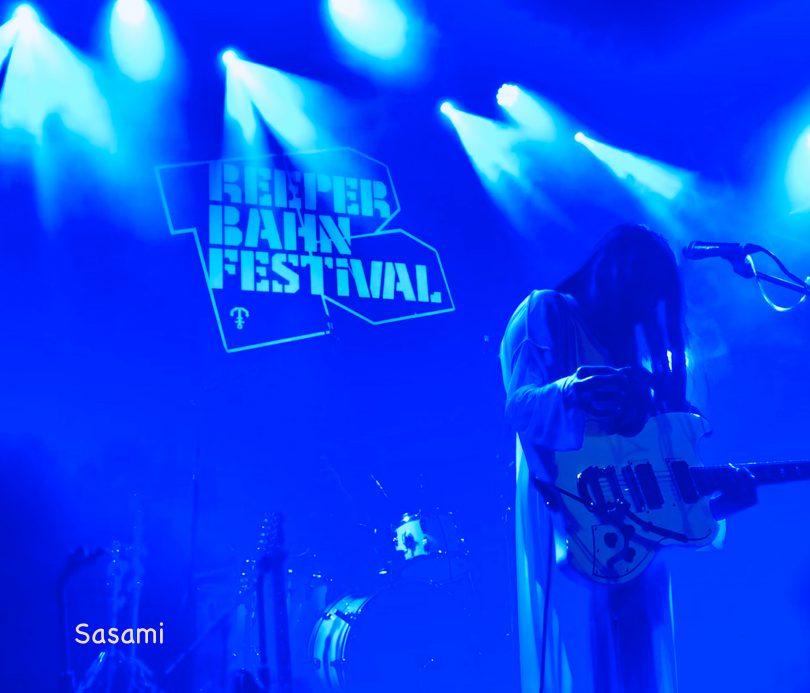 It’s that time of the year again: the famous Kiez of St. Pauli buzzing with sounds, words and music fans during the 14th edition of the Reeperbahn Festival in Hamburg. Four festival days packed with numerous talks, awards and meetings – Same procedure as last year? The answer is both yes and no.

Taking part at the annual RBF almost feels like a very pleasant class reunion: meeting up with dear old friends I only get see once a year like Dino, who works for Redeye Distribution in Berlin or my dear colleague Alice from Aachen. She runs the fabulous blog Offbeat Music and also cares for music in her radio shows for ByteFM and NovumFM. And of course, there’s loads of music to hear and to discover! Sometimes too much at once with 90 venues on board for 600 shows. Not really a bad thing, right?

I wasn’t at all familiar with the first band I watched on Wednesday evening and had no idea what to expect. W.H. Lung hail from Manchester, played as a five piece and mix several goods from the 70ties to 90ties: some kind of motorik synthie-pop, combined with a shoegaze guitar sound and a slight dark wave attitude. Imagine Stone Roses married to Neu! while flirting with Joy Division. It was a wild combination, groovy and forceful. The lanky singer of W.H. Lung exposed some versatile skills in body balance while his bare feet showed a daring collection of colourful toenails.

Another flamboyant detail popped up later this evening when the Finnish soul singer Bobby Oroza played his showcase at Angie’s Nightclub. He presented his soul-soaked tunes in a matching wardrobe from head to foot with classy dark suit, pocket square and shiny black shoes. All topped up with magenta-coloured socks! Oroza’s handsome appearance and sentimental sound may feel like being caught in a long-lost time warp, but that’s fine. His heartfelt crooning was perfectly harmonized, relaxed and comforting, sometimes refined with jazzy guitar chops and an up-tempo rhythm section. At one point he apologized: “I only got love songs. I hope that’s alright?”. No doubt about it, Bobby Oroza’s a humble artist with exceptional style and talent.

Thursday for me at the Reeperbahn Fest was a bit of a dilemma. Three showcases I wanted to see shared the same time slot. Bummer! In the end I chose Sasami and I think this was a pretty good decision. The classically trained indie-songwriter Sasami Ashworth is anything but ordinary. She’s an artist making her own way and transformed her songs to an inspiring live experience as a trio. Sometimes I worried her long hair might get tangled up between the strings of her guitar. Her performance was raw and powerful with a refreshing and healthy “fuck this!” attitude. Sasami never intended to please the crowd. But she’s on a mission and she cares for female empowerment. Again and again she mentioned the hashtag #empoweringwoman. Right on! Some people in the audience were overwhelmed, if not disturbed by her statements, and she obviously touched a raw nerve.

And here’s the thing: The Reeperbahn Festival signed up to Keychange, an international initiative who cares about gender equality in the music industry. This year’s line-up was indeed progressive, lots of female artists included like Sasami from California and her excellent female rhythm section. But the harsh truth is: the venue for her was only half-filled and the audience mostly male. Sasami definitely deserved better. 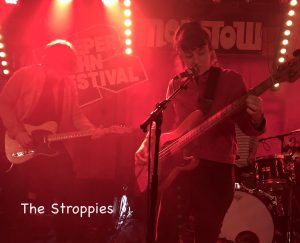 My next musical highlight happened on Friday, shortly after midday. Australia was this year’s focus country and thankfully not only big names like Feist were thrown into the festival field, also the less known Indiepop act The Stroppies played two shows.

The stage at Molotow for The Stroppies was tiny and the PA system wasn’t the best. Nevertheless, the four-piece from Melbourne managed to play an enjoyable and charismatic set of old school jangly guitar tunes. I quite liked the enthusiasm of the drummer, who sang along all the time although he had no mike. The bass player was super cool and her deadpan vocals added a light post-punk feel in to the mix while the other singer changed between strumming the guitar or dealing with the vintage keyboard. Sometimes on his knees and with his head on the keys. Above all, it was fun and fresh. The Stroppies finished off with delights and the brooding vibe of Cellophane Car – this alone was already worth doing the festival trip to Hamburg! But hold on, there was more good stuff to follow.

When the Brighton quartet Penelope Isles released their debut album on Bella Union this year, I worshipped a few tracks. But live, they were incredibly impactful and impressive. With up to four voices in the mix, Penelope Isles presented a super tight and powerful performance of harmony-laden indie rock galore and beyond. The band acted like a solid unit, easily managed to shift between instruments and genres. Maybe it’s because the two singers and songwriters are brother and sister – it’s a family affair with a deeper understanding for sonic aesthetics and expression. Their song Gnarbone ended up as a ten-minute adventure of captivating heavy psyche-rock dynamics. At some point the track ended, but suddenly they start again and the audience just went crazy. It was one of these special goosebumps’ moments, a rare treat in live music these days.

Thank you Penelope Isles and thank you Reeperbahn Festival 2019. It was a real pleasure again.