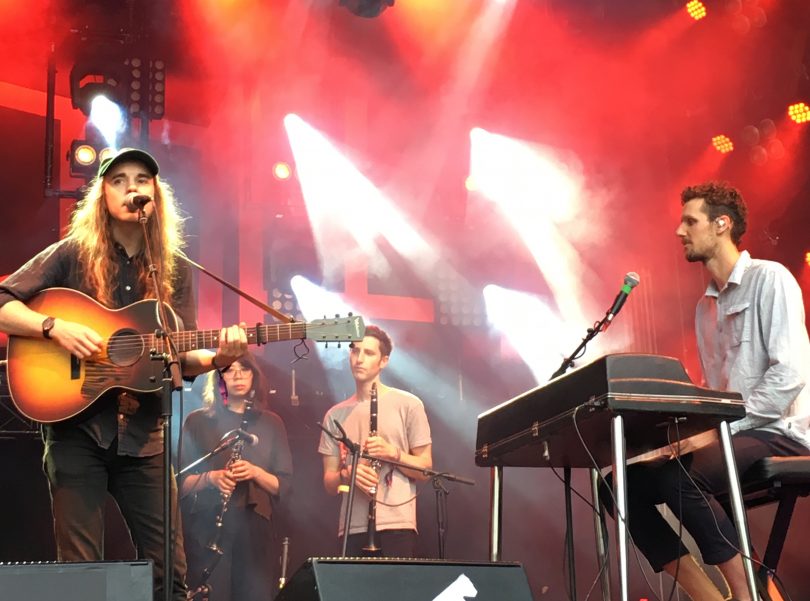 Last weekend I took the train to Winterthur about 90 minutes NE of Bern, to pay a visit to the city’s annual Musikfestwochen. The name “Musikfestwochen” sounds like an earnest classical affair, but don’t worry: this neat and predominantly free festival started in the seventies as an alternative music event and proudly celebrated its 42nd edition this year with 12 days of music and a nice selection of local and international acts. Thankfully the rainfall stopped in time and the sun came out again when I found myself in the historic center of Winterthur on Saturday to watch the Canadian singer-/songwriter Andy Shauf. He released the most impressive concept album last year based on a party, filled up with sophisticated string arrangements and mesmerizing melodies. Furthermore I was curious to hear, how this intimate, soul-feeding gentle pop works out on a Swiss festival stage.

Of course, you figured out by now that the Winterthurer Musikfestwochen is not a common festival. Apart from some notorious hipsters the audience is pretty mixed, more like a social event for all ages. And the whole setting is nice and comfortable, with many stalls to get your beer from the local “Chopfab” brewery or traditional Swiss food. All this works well for Andy Shauf. When he enters the stage, long haired and coupled with a trucker cap, he looks like the young J Mascic of Dinosaur Jr. But this first impression on Andy Shauf from Regina, Saskatchewan is leading to the wrong path: instead of furious feedbacks he prefers tone over volume and creates an emotionally resonant and captivating performance from the first minute to the end. His narrative style is accompanied by a full band which includes not only one, but two clarinet players and they capture the studio sound of the record surprisingly well: all the subtleties and melodic lines sound perfect and the audience pays decent attention, although most of them probably had never heard of Andy Shauf before and want to see the other acts of the following evening.

While the sun sets down, the Irish songwriter Glen Hansard puts on a solid one man show for the lovers of more roots inflicted singer-/songwriting tunes. Thereafter it’s time for another renowned artist from Canada: Feist is closing the night with a glamorous show, performing songs from her latest album Pleasure. I’m surprised how relaxed she keeps chopping her guitar and how she enjoys talking to the audience in-between songs. But when I head back home, it’s the empathetic sound world of Andy Shauf that keeps spinning in my head.

Anyhow, it looks like I’ll be getting on the train again in August 2018, when another round of music and celebration hits the lovely town center of Winterthur.