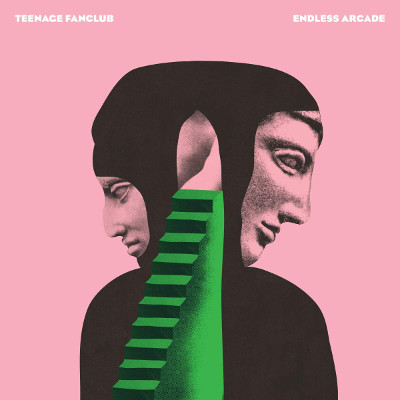 Cultural history offers countless examples of how great art can be crafted in troubling times. When severe suffering and grief creates an urgency, it’s a benefit for the piece of work. Certainly, the brilliance of Teenage Fanclub’s Endless Arcade is not all due to drama and turmoil. But it’s a part of it.

After three decades in the band’s history, bassist and singer-/songwriter Gerard Love vacated his spot in 2018. Almost simultaneously, Norman Blake found himself in front of the ruins of a long-term relationship. Therefore, the eleventh studio album Endless Arcade deals with a double „farewell to Love“ – and shows a setting of existential emotions.

The Scotsmen decided not to replace the position of Love, but to reassemble the entire framework. Welsh all-rounder Euros Childs (formerly of Gorky’s Zygotic Mynci) is now a full-time member of the TFC family. In addition to angelic background vocals, he provides some thoroughly complex layers with all sorts of keys and buttons. Dave McGowan (who also plays with Belle and Sebastian) moved from the keyboards over to the bass and contributes a new vibrant quality to the rhythm section.

This slight shift in sentiments and sound results in a crystal-clear constellation. With Norman Blake and Raymond McGinley, we now have two songwriters who complement each other. While Blake reveals his troubled inner life unveiled, McGinley stands by his side with comforting words: „Don’t be afraid of this life“ he sings in the title track. Both are responsible for six songs each on Endless Arcade, the authorship can always be clearly recognized. Thus, the album unfolds a high narrative and aesthetic coherence, a touching interplay between despair and hope.

The production is subtle and well-crafted. Some of the multi-harmonies create a beautiful texture, like the timeless sounding „Back In The Day“. The band revealed that there are 34 tracks of vocals on this song, the melody virtually seems to float and you never want it to stop. Almost like an a cappella starts the passionate „Come With Me“, the guitar slowly appears out of the background and is based on a special tuning McGinley once saw written on one of Sonic Youth’s guitars at a gig in the mid 80’s – it’s one of those magic goose bumps moments of Teenge Fanclub.

And let’s be frank, most favourite bands from yesterday are sooner or later history. They disappear with the trends, take the wrong drugs, or become a sad parody of themselves. Teenage Fanclub, on the other hand, always was and is still there, always with the right songs at the right time. They are a reliable institution constantly evolving their creative process. A band to grow old with, a soundtrack of a lifetime. From the unpolished noiserock of their debut A Catholic Education (1990) to the glorious powerpop on Bandwagonesque (1991) to the new album, their songs have become more and more mature, graceful – and personal.

Although the lyrics reflect private sensitivities and all songs were completed before the lockdown, many passages can be read as comments on the current pandemic: „I could live in isolation“, „It’s hard to walk into the future“, „Everything is falling apart“ – and the nostalgic opener is titled „Home“. Here the band opens up to a great jam and provides the perfect template for McGinley’s elegant guitar skills. His four-minute loose solo was completely improvised in the moment of recording.

Rendering things unadulterated is one of the core strengths of Endless Arcade. Produced in Hamburg’s Clouds Hill Studio, the album is as modest and honest as it is brilliant. It touches without weighing down. A bittersweet masterpiece.

Endless Arcade is out now on all formats via PeMa and Merge Records.

A shorter version of this article in German was first published via ByteFM.