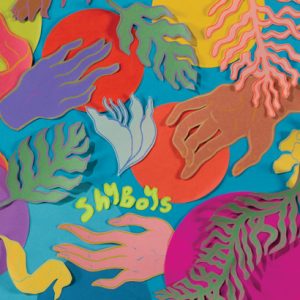 Oh well, I’ve been caught up by too many things and completely neglected my blog – sorry for that! It’s not dead yet. All I needed was a good reason for getting back into the writing business again and here it is, thanks to Shy Boys and their outstanding new album Bell House.

My colleagues at ByteFM already described its brilliance in a top-notch review in German. But I have to express my own excitement about this record here for you and for the music geek in all of us. So here we go: Shy Boys are a quintet from Kansas City and I know there are some very fine bands hailing from this area like The ACBs or Ghosty and also The Coctails were once founded at the Kansas City Art Institute before moving to Chicago.

And now we have Shy Boys, five guys singing sweet little, affirmative songs in perfect harmonies and I’m not at all surprised to see, that two bandmembers also play with The ACBs: there’s a similar feel to it in terms of sound and shape. But here on their second album, Shy Boys are taking the notorious indie-pop to a higher level and created nothing but a little masterpiece. It’s all good, from start to finish filled with musically nimble songs.

Of course, it’s easy to pin down some glorious influences: The Beach Boys moments, the sense of harmonic structures from singing in the church – but all this put together in a very gentle, upright and beautiful intimate way – it’s simply hard not to fall for this. While lead songwriter Collin Rausch sings about childhood memories and reflects on mundane things in life, the band creates an atmosphere of creativity and faithfulness, all in the sake of the unspoiled pop experience. I’d say you can hear there’s a quality in all this which only evolves over time when there’s a special connection between all band members. And indeed: Shy Boys is the product of five best friends (two of them brothers) who manage to combine all the soul-feeding harmonies and strong songwriting with an almost natural, effortless touch. It’s a very special thing, please check it out!