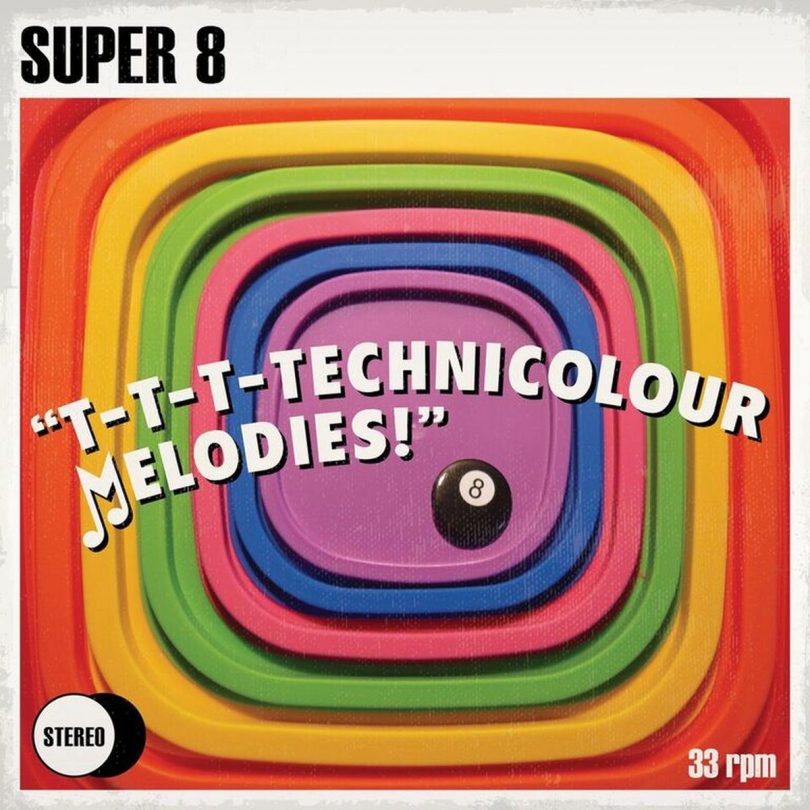 It can be a real challenge, doing research for my radio show about new or less known artists. I’m always curious to know more about the people behind the music and like to pass on some extra details to my bright listeners. These days, you might think, any information is easy to find online. But no: often enough, I have very little to work with.

This was also the case, when I first listened to the fabulous song collection on T-T-T-Technicolour Melodies! by SUPER 8 – there was almost no background information available. But as it happened, I shared direct messages with TRiP, the artist behind SUPER 8 and luckily, he didn’t mind me asking some nosey questions!

When did you start playing music?

I was given a cheap, catalogue guitar when I was a kid and, although it intrigued me, it was more of a prop than an actual working instrument. I got a better guitar when I hit my teens and started to take music-making more seriously from there on in (especially when I realised that music came fairly easily to me!)

Any band projects we should know about?

I was in bands when I was growing up in the North West of England. I would stand in on bass, I even tried to convince myself I was a lead guitarist for a spell but, looking back, it was just a rite of passage …. It wasn’t until I left the North West and moved to Scotland around the turn of the century that I decided I wanted to try and make more of a go of music (which also coincided with me actually singing my songs for the first time – prior to that I had never sung publicly before).

I’d like to know more about the details of your latest album T-T-T-Technicolour Melodies! – Are you a one-man-band (who plays Cello and Trumpet)? How did you manage the process of recording?

Ha! Ha! Yes, I’m a one-man-band Jack-of-all-trades/master of none! Everything on the “T-T-T-Tech Mels!” album is just Me, Myself & I. That said, writing, performing, recording and producing everything myself wasn’t something I consciously set out to do – it just happened. Moving north of the border, I didn’t know anyone to begin with so I just fell into doing stuff on my own as in: “I’m hearing cello on this latest song but I don’t actually know anyone who plays cello so I’ll just have to hire one and try to play it myself!” As with pretty much everything I play, the fact that I have no formal training nor practical/technical experience when it comes to playing it doesn’t seem to stop me. I’m really just making this up as I go!

Apart from being colourful, how would you describe your sound as SUPER 8?

As a writer, it tends to start with just a snatch of a basic vocal melody with a loose acoustic guitar accompaniment. Once I’ve mapped out the rough shape of a song, I try to let the song tell me where it wants to go rather than the other way around! Sometimes it doesn’t need much more than where it originally springs from acoustically (like tracks ‘To Morocco’ & ‘Just A Serenade’ for example). Other times a song gets to get ‘the works’ (eg: backwards loops; glockenspiel; kitchen sink?!) just whatever suits and is right for the song really!

You name The Monkees as a major influence – why them? Aren’t they just a silly boy band, a retort product made for the masses?

Yeah, of all the amazing bands out there it’s a bit tongue-in-cheek I guess to pick The Monkees as a major influence but I guess they are! I used to watch The Monkees TV repeats as a kid – it was my favourite programme. I guess they just stuck with me (plus they had some amazing songs!!!)

Any other important influences or bands you like to relate to?

I was brain-washed as a child with a diet of Beatles/Stones/Kinks/Simon & Garfunkel and Neil Diamond (I found The Monkees all by myself – LOL!) Growing up when a lot of my peers were embracing the whole New Romantic movement I instead found myself gravitating back in time to the music of: T-Rex; Bowie; Neil Young; James Taylor; etc. I suppose the first band of ‘my generation’ that moved me musically was The Smiths and, from there, I began to find my niche. I got the jangly guitar bug from C86 onwards. You’ve got to love a bit of McCarthy et al on occasions! I actually love & appreciate loads of music from Classical to ‘cheesy’ 60s Bossa Novas through to the cut-n-paste audio mash-up montage work of acts like The Avalanches but the stuff I keep coming back to, the music that really floats my boat I guess, is great songs by predominantly guitar-based bands! Think: Beatles; Beach Boys; Big Star; The La’s; Teenage Fanclub; Elliott Smith; you get the idea!

You covered Serious Drugs by the BMX Bandits – why did you choose this song?

Err, it just sort of happened really! It came up on an old mix tape a while back. I hadn’t heard it in some time but I still remember buying it when it first came out after hearing it on the John Peel show. It was one of those songs that instantly ‘struck a chord’ with me on first hearing – it has everything that constitutes a GREAT song in my book! Anyway, it must have been working away on my sub-conscious as, the next time I picked up a guitar, I started playing it (albeit with the wrong chords to begin with!) I’m not really known for doing cover versions per se (what time I have to make music is usually spent writing my own stuff) but it seemed to make sense that I try and do it justice and give it a go. It didn’t take very long to come together which is always a good sign for me. I was honoured to discover recently that the guys who actually wrote said song (namely Duglas T Stewart of BMX Bandits; Norman Blake of Teenage Fanclub and Joe McAlinden of Superstar fame) wholeheartedly approve of my rendition. I’m not worthy!

For your own songs, it feels like there’s some autobiographical stuff coming in?

Yeah, I guess drawing from personal experience does have a habit of creeping in but I do try to keep an open mind and write from different perspectives too.

S.K.Y. is quite a thoughtful song, what’s the story behind this tune?

Someone I knew was in a difficult place. I couldn’t find the right words to say at the time but, with guitar in hand, this song just presented itself. Music is weird like that (weirdly good!)

Do you play live shows?

Like I say, I was in bands when I was younger. When I first moved to Edinburgh I used to play on the acoustic open-mic circuit (KT Tunstall’s Cowgate sessions and Paul Gilbody’s ‘Acoustic Edinburgh’ nights for example) but these days I find playing on my own acoustically is quite limiting. I’ll be playing and thinking: “Where’s the trumpet solo?” “Where’s the double bass?” In fact, the last ‘proper’ gig I did was back in 2006 supporting ‘The Stylistics’ at Dunfermline’s Carnegie Hall. They had a full 13 piece band on stage whereas I just rolled up with my acoustic and a harmonica – it was quite daunting! I’m not ruling out the whole playing live thing for the future but you have to wear a different hat. I’m definitely more ‘at home’ in the studio nowadays.

How come you ended up with Futureman Records, a label in Detroit? Do you actually need a label these days when there’s Bandcamp?

The whole business of music is SO different nowadays. Deep down I’m still ‘old skool’ in my tastes I guess. As I say, I’ve become a bit of a studio hermit over the years! I hadn’t really planned on being on a label so wasn’t actively seeking one out but, off the back of my BMX Bandits cover as it turned out, I was approached by Futureman Records’ head honcho Keith Klingensmith and, after checking out his label I thought: “Yeah! Why the hell not?” With bands like The Hangabouts signed to the label, I guess it’s put a new spin on things for me. It’s no longer just me tinkering away in my home studio, I sort of feel part of an international music club with proper deadlines to meet and stuff! It’s all very professional (even though it’s not – Ha! Ha!)

Any idea, why power-pop is such a male dominated thing? To me it seems like girls are very present in the songs, but never play instruments…

To be honest I don’t even know what ‘Power Pop’ is! Great songs are great songs regardless of genre tags & pigeon holes. Is Lindsay Murray (also signed to Futureman Records) ‘Power Pop’? She’s female, she plays a Rickenbacker … does that make her ‘Power Pop’? I really don’t know! If girls wanna BE ‘Power Pop’ then, hey, take out a loan, get your folks to remortgage their house or whatever it is you need to do to be able to beg, borrow steal said seemingly pre-requisite Rickenbacker then write some (good!) songs and just BE ‘Power Pop’ ladies (or not!)

What was the first and the very last record you bought?

What are your plans for the future?

I’d just like to be able to eke some kind of sustainable way of being able to do what I love which is making music. The way things stand, music just doesn’t pay the bills … at all! It would be great to be in the fortunate position whereby writing songs is just ‘what I do’ and a means to just getting by.